Judges and hearing officers apply the law by overseeing the legal process in courts.

They typically do the following:

Judges commonly preside over trials and hearings of cases regarding nearly every aspect of society, from individual traffic offenses to issues concerning the rights of large corporations. Judges listen to arguments and determine if the evidence presented deserves a trial. In criminal cases, judges may decide that people charged with crimes should be held in jail until the trial, or they may set conditions for their release. They also approve search warrants and arrest warrants.

Judges interpret the law to determine how a trial will proceed, which is particularly important when unusual circumstances arise for which standard procedures have not been established. They ensure that hearings and trials are conducted fairly and that the legal rights of all involved parties are protected.

In trials in which juries are selected to decide the case, judges instruct jurors on applicable laws and direct them to consider the facts from the evidence. For other trials, judges decide the case. A judge who determines guilt in criminal cases may impose a sentence or penalty on the guilty party. In civil cases, the judge may award relief, such as compensation for damages, to the parties who win lawsuits.

Judges use various forms of technology, such as electronic databases and software, to manage cases and to prepare for trials. In some cases, a judge may manage the court’s administrative and clerical staff.

The following are examples of types of judges and hearing officers:

Judges, magistrate judges, and magistrates preside over trials and hearings. They typically work in local, state, and federal courts.

In local and state court systems, they have a variety of titles, such as municipal court judge, county court judge, and justice of the peace. Traffic violations, misdemeanors, small-claims cases, and pretrial hearings make up the bulk of these judges’ work.

In federal and state court systems, district court judges and general trial court judges have authority over any case in their system. Appellate court judges rule on a small number of cases, by reviewing decisions of the lower courts and lawyers’ written and oral arguments.

Administrative law judges, adjudicators, and hearing officers usually work for local, state, and federal government agencies. They decide many issues, such as whether a person is eligible for workers’ compensation benefits or whether employment discrimination occurred.

Judges and hearing officers do most of their work in offices and courtrooms. Their jobs can be demanding, because they must sit in the same position in the court or hearing room for long periods and give undivided attention to the process.

Some judges and hearing officers may be required to travel to different counties and courthouses throughout their state.

The work may be stressful as judges and hearing officers sometimes work with difficult or confrontational individuals.

How to become a Judge and/or Hearing Officer

Judges and hearing officers typically must have a law degree and work experience as a lawyer.

Although there may be a few positions available for those with a bachelor’s degree, a law degree is typically required for most jobs as a local, state, or federal judge or hearing officer.

In addition to earning a law degree, federal administrative law judges must pass a competitive exam from the U.S. Office of Personnel Management.

Most judges and magistrates must be appointed or elected into their positions, a procedure that often requires political support. Many local and state judges are appointed to serve fixed renewable terms, ranging from 4 to 14 years. A few judges, such as appellate court judges, are appointed for life. Judicial nominating commissions screen candidates for judgeships in many states and for some federal judgeships.

For specific state information, including information on the number of judgeships by state, term lengths, and requirements for qualification, visit the National Center for State Courts.

Most judges and hearing officers learn their skills through years of experience as practicing lawyers. Some states allow those who are not lawyers to hold limited-jurisdiction judgeships, but opportunities are better for those with law experience.

Most judges and hearing officers are required to have a law license. In addition, they typically must maintain their law license and good standing with their state bar association while working as a judge or hearing officer.

Employment of judges and hearing officers is projected to grow 2 percent from 2019 to 2029, slower than the average for all occupations.

These workers play an essential role in the legal system, and their services will continue to be needed into the future. However, budgetary constraints in federal, state, and local governments may limit the ability of these governments to fill vacant judge and hearing officer positions or authorize new ones. If there are governmental budget concerns, this could limit the employment growth opportunities of hearing officers and administrative law judges working for local, state, and federal government agencies, despite the continued need for these workers to settle disputes.

The trade associations listed below represent organizations made up of people (members) who work and promote advancement in the field.  Members are very interested in telling others about their work and about careers in those areas.  As well, trade associations provide opportunities for organizational networking and learning more about the field’s trends and directions.

One of our most important rights —the right to a fair trial— rests on the shoulders of judges and hearing officers. They conduct pretrial hearings, resolve administrative disputes, facilitate negotiations between opposing parties, and issue legal decisions. Judges hear cases that range from traffic offenses to the rights of large corporations. Before a trial, they often review documents, research legal issues, and listen to arguments to determine if a trial is warranted. Depending on the case, judges either instruct jurors on the law and guide them in considering evidence, or decide the case directly, determining whether a sentence or penalty is justified. Critically, they ensure fair proceedings so that the legal rights of all involved parties are protected. Administrative law judges, adjudicators, and hearing officers operate outside the courts— they work for government agencies, on issues such as determining eligibility for workers’ compensation benefits or verifying a case of employment discrimination. Judges and hearing officers work for state, local, and federal governments. Hours are full time, sometimes with evening and weekend hours, and on-call duty for emergencies. Although a few positions require only a bachelor’s degree… a law degree, license, and years of work experience as a lawyer are typically required for judges or hearing officers. Some positions are elected… others are appointed… for terms lasting from 4 years to life. 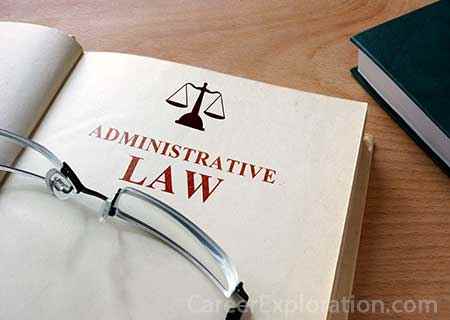 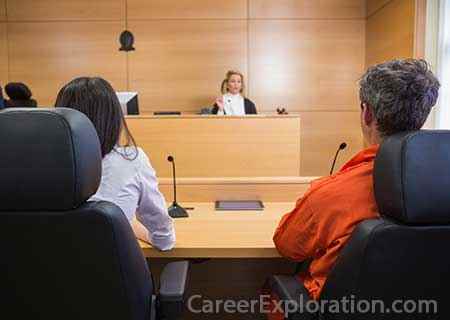 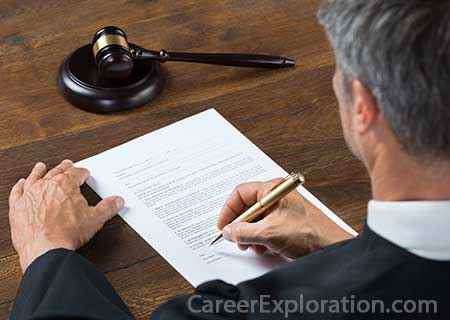 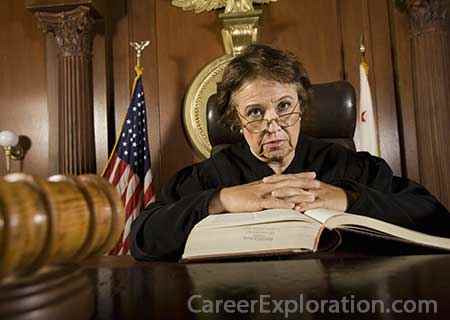