Jen understands risk. She routinely harnesses first-time skydivers to a parachute system and falls out of an airplane with them. As they plummet toward the ground at 120 miles per hour, Jen is responsible for controlling the fall and deploying the parachute. “It’s like you’re flying,” she says. “You feel very powerful and very vulnerable at the same time.” After opening the parachute, she maneuvers herself and her student safely to the ground.

Helping students during a jump and successfully giving them their first skydiving experience is just part of the job for Jen, a skydive instructor in Osage City, Kansas. Before each jump, Sharp checks the weather, readies the equipment, and teaches her students about proper jumping procedure. “We prepare so much,” she says, “but in the moment, you just have to act. That’s an intense, fun part of what we do.”

People like Jen are drawn to the high-intensity careers described in this article. Keep reading for data and more information from the U.S. Bureau of Labor Statistics (BLS) about the job outlook, typical entry-level requirements, and pay for some of these occupations.

Across all occupations there is the possibility for intense situations. But in the occupations described here, the chances of encountering them are high. And in many cases, lives or property are at stake.

Uncertainty is also a given, as workers rarely know exactly what will happen next. “With a flick of the switch, everything changes,” says emergency medical technician (EMT) Frank of Elizabeth, New Jersey. “Everything can be perfectly normal one minute, and then it’s not.”

Charts show 2014–24 projected job openings for selected occupations. These openings are expected to arise from the need to replace workers who leave an occupation permanently and from growth.

Every city and town needs workers to keep the public safe and maintain law and order. And doing so, at times, is risky. Chart 1 shows projected job openings for some of these protective service occupations. 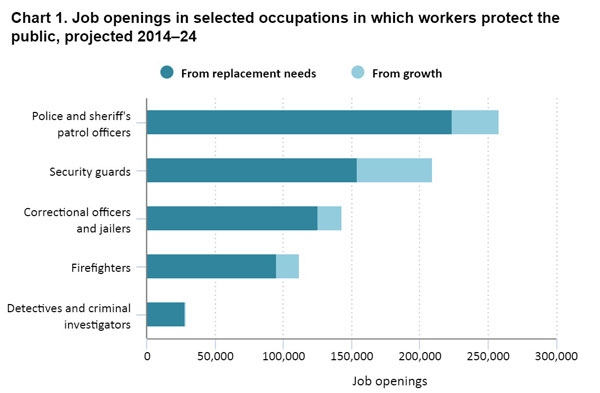 Firefighters. Whether rushing into a burning building or acting as first responders during medical emergencies, firefighters perform a variety of challenging tasks.

Police. Police are always on the lookout for trouble as they patrol areas for signs of criminal activity, respond to calls, and arrest people suspected of breaking the law.

Security guards. These workers monitor for theft, terrorist acts, and other illegal activity. Security guards may experience intense situations when called on to enforce the rules. 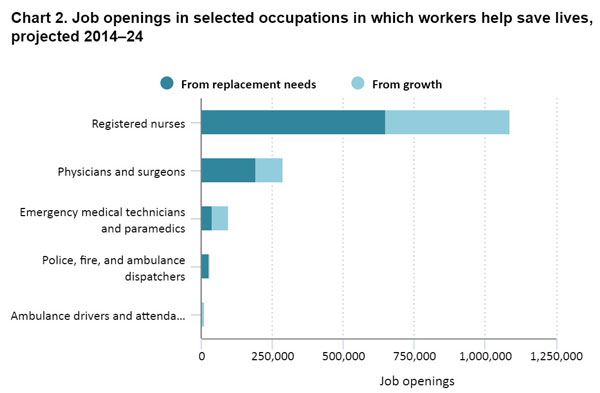 Critical care nurses. These nurses care for patients who require intensive care, which might involve, for example, monitoring people who have gone into shock.

ER physicians. Trauma, accidental poisonings—lots of medical problems might present themselves in the emergency room that can cause these doctors’ stress levels to rise.

These workers go places—or do things—that others dare not, all for the sake of their jobs. Chart 3 shows projected job openings for a few occupations in which danger or adventure are often intertwined with the work. Military careers are not included in the chart, because BLS does not make projections for those occupations. The number of military personnel is expected to remain fairly consistent through 2024, with job openings arising from the need to replace those who leave military service. 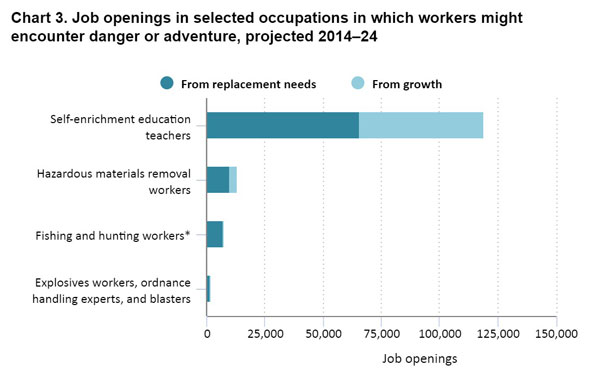 Extreme sports instructors. A relatively small number of self-enrichment education teachers show others how to perform daring feats, such as rock climbing, skydiving, or whitewater kayaking.

Fishing workers. Fishing workers are on the seas in all conditions, doing very physical work on slippery surfaces and risking injury. However, excitement kicks in when they bring in a large haul.

From highest highs to lowest lows

The median annual wage for most of the occupations in table 1 was higher than the $35,540 median wage for all occupations in May 2014, according to BLS. In addition to providing good wages, intense or action-packed careers are often interesting and fulfilling, say workers in these occupations.

But the stress can take a toll, and despite workers’ best efforts, there is no guarantee things will go as planned. “There are always those situations that don’t have the happy ending we all hope for,” says Blake, a police dispatcher in Detroit, Michigan. “That’s hard to deal with, and you may even second-guess your decision-making.” 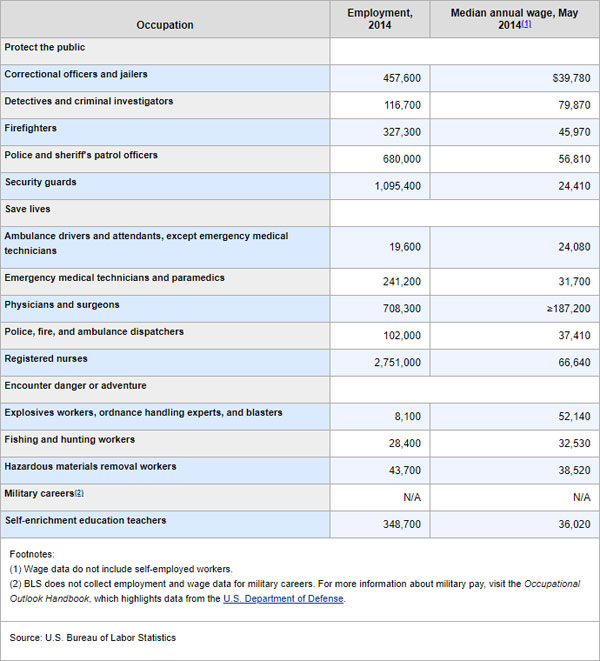 Schedules may be long and grueling, with some workers regularly having 10- or 12-hour shifts that include nights, weekends, or holidays. And in many of these occupations, injury, illness, and fatality rates are higher than average.

To reduce risk factors, workers take precautions, such as by wearing protective gear or adhering to workplace safety guidelines. Still, their jobs may expose them daily to disease, suffering, or other physically and emotionally taxing situations.

Support from colleagues helps these workers persevere through the hardships. And many are driven by a desire to succeed amid challenges. Working through difficult situations is important, says Jen—especially when giving up is not an option. Blake agrees. “You can’t get upset or shaken up,” he says. “You just do your job.”

The variety of work in many of the occupations is also a plus. “Every day is an adventure,” says Frank. But perhaps the greatest reward is the opportunity to have a positive effect on others. “When you go home, you feel like you’ve served a purpose,” says Kevin, a correctional officer in Brazos County, Texas. “That’s really satisfying.”

Workers in high-intensity jobs say it takes a lot more than a desire for action or excitement to succeed in these occupations.

For starters, you must be adaptable and perform well under pressure. Good judgment and self-control are also important. And the ability to communicate with all types of people is essential, as is following protocol. “When you take shortcuts, that’s when things become risky,” says Stuart.

In addition, some combination of education, training, or other preparation is typically required for entry. (See table 2.) 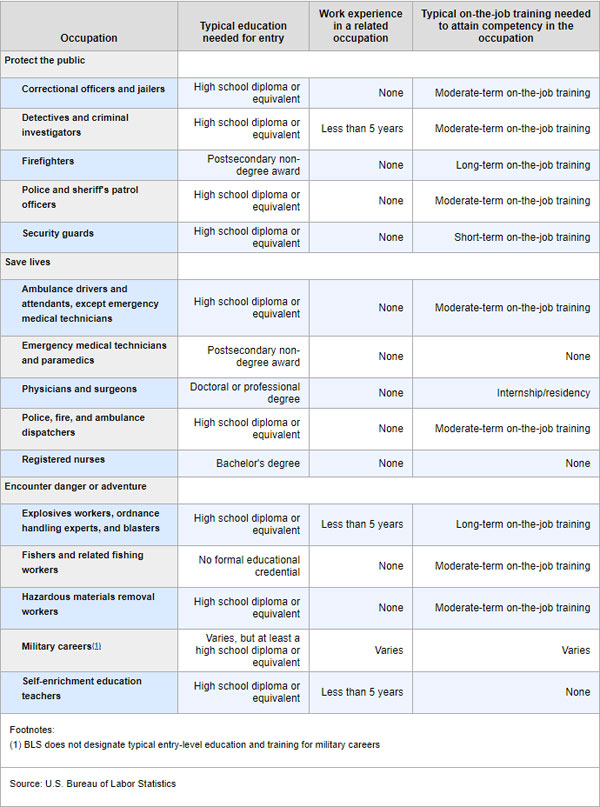 To enter most of the occupations mentioned in this article, you’ll need a high school diploma or the equivalent. But even then, employers may prefer to hire workers with additional education. Only fishing workers typically can enter their occupation without a formal educational credential.

Among the occupations that typically require higher levels of education for entry are firefighters (certificate or other postsecondary nondegree award), registered nurses (bachelor’s degree), and doctors (professional degree.)

Performing well in high-stress situations requires a certain level of competency, which is frequently honed while training on the job. Table 2 shows the length of this training typically needed once employed in an occupation.

Security guards, for example, typically need no more than 1 month of on-the-job experience and informal training. Hazardous materials removal workers are among those who may need up to 12 months of training. And firefighters and explosives workers usually develop their skills on the job for more than a year.

Like workers in other occupations, those in high-intensity jobs must meet a variety of additional requirements. To become an entry-level criminal investigator, for example, you typically need work experience as a police officer. And in many of these occupations, such as registered nurse, workers need a professional license.

Still other qualifications might include age requirements, U.S. citizenship, and a valid driver’s license, as well as passing a physical exam, drug screening, or background check.

Because of the unique rigors of these jobs, you may want to experience the work firsthand before pursuing a career. You might, for example, do a ride-along with an ambulance driver or shadow a fishing worker. Internships are also helpful.

In fact, there may be lots of ways to get a sense for what these workers do. Frank first became interested in emergency response work after his uncle gave him a police scanner, so he could listen in on the action. He became so intrigued, he asked to do a sit-along at a local 9-1-1 center, which confirmed his passion. “That’s what grasped me and got me addicted to the job,” he says.

For people who thrive on action, their attraction to these occupations may differ. But high-stakes careers often have at least one thing in common: The daily uncertainty offers a chance to develop as a person. “I still learn new things,” says Jen. “You can always keep growing.”

Learn more about the occupations in this article and many others, such as surgical technologists, logging workers, and emergency management directors.